Deadly Cows and Living Inside of Whales

Humans aren’t good at estimating probabilities. My sense for how likely something is usually arises from a kind of intuitive hunch about it that comes from the comfort level of the idea. If it feels cognitively uncomfortable, like if someone says, “Eggplants usually grow to weigh more than 20 lbs.,” I’m skeptical. But if it feels familiar or comfortable in my head, like, “Justin Beiber actually can’t play any musical instruments,” I’m inclined to accept it.

Behavioral economists like Daniel Kahneman and Amos Tversky have identified a bias that lives here. It’s called Availability Bias. Formally, the idea is that we are prone to mistake the ease with which something is called to mind, or the subjective comfort we have with an idea, for its objective probability. In one famous experiment, subjects were asked to estimate whether there are more English words that begin with “r” or have “r” as the third letter. Since calling words to mind that start with “r” is easy, most people answer that those are more common. But being able to readily recall words that start with the letter is a quirky feature of the human brain. We’re good at that, just like we’re pretty good at memorizing 7 digit strings of numbers like phone numbers, but 13 digit strings are much harder. Our brains are not well-equipped to do a systematic search of words with “r” in the third position, but we mistake that subjective difficulty as representative of their real frequency in the world.

The mistake comes out in lots of places. During Shark Week on the Discovery Channel, people are more afraid of shark attacks and estimate their likelihood as higher. Cows, it turns out, are the real menace to society. You are more than 20 times more likely to be killed by cows than by a shark. People think that zombies and vampires are more plausible now than they did several decades ago when they weren’t such a large part of pop culture. We all drive more conscientiously for the weeks after someone we know has been in a serious car wreck, and we watch our salt intake more closely when a relative has recently had a heart attack. 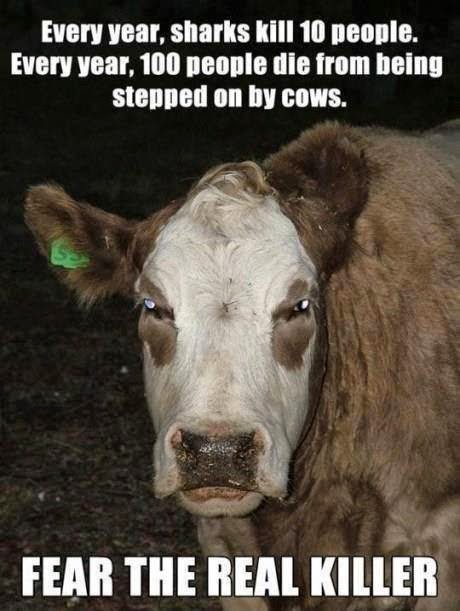 Now I’m going to suggest something that may offend. Why is it that so many people who are otherwise quite reasonable, and who would never believe similar claims out of context, claim to actually believe outlandish stories like Jonah and the Whale, the Genesis Creation story, the claim that Noah lived to be 900 years old, the story of Joseph Smith being visited by an angel who gave him the book of Mormon, the story of Mohammed being visited by angel who gave him the Koran, and Paul having a seizure and hearing the voice of God? If comparable stories were offered with different, unfamiliar details, I think most Americans would be skeptical at the very least. In fact, if you’re the typical mainstream American Christian, you are skeptical about the Mohammed story and the Joseph Smith story. But tens of millions, perhaps hundreds of millions of Americans take these claims to be true. I take it as pretty obvious that they are not. And I think it’s availability bias that has artificially elevated the plausibility of them in people’s minds. How did these stories become so available to so many people? When people hear such stories over and over, hundreds or thousands of times through childhood and into adulthood, and when the stories are treated as momentous, or even historical, it has the same effect on our probability judgments as Shark Week. When we see portrayals, reread the stories, and hear them repeated and treated with reverence thousands or tens of thousands of times, they come to feel familiar, vivid, and, ultimately, probable. The readiness with which the idea can be called to mind gets mistaken for its reality. I don’t think it is too much to suggest that our widespread acceptance of the story of Jesus’ return from the dead can be attributed, at least in part, to availability bias too.

I’m not offering an argument here for why I think these claims are false. I think you’ll already agree with me in the abstract that it is exceedingly unlikely that a person could survive for several days after being eaten by a whale. And humans do not, as far as we know, ever live much past 100 years, even with all of the benefits of modern medicine and health research. And the religious example aside, you’ve never heard a single plausible report of a human actually being biologically dead and then returning to normal living function after three days. You already share my skepticism about other claims like these. In other contexts, you already agree that such claims are outrageous. So why is it that the religious examples don’t feel more cognitively uncomfortable? Availability bias.

Here’s a meta-level way to think about your own disposition to make this mistake (and lots of others). We all possess nervous systems that do a pretty good job of solving some problems. But we know that when we put them in certain environments, or frequently expose them to certain kinds of stimuli, like mythological stories, those exposures skew the system’s capacity to sort true from false, probable from improbable, reasonable from unreasonable. And knowing that we are built that way facilitates our efforts to compensate and correct for the bias.