A meta is just a meta

Does self awareness add something of value or take it away? Consider some examples:

In philosophy, Harry Frankfurt gives an account of personhood that necessitates a multi-tiered awareness of desires. A person not only has desires, but also has desires about those desires. Your homeostatic existence, its torture or its ease, depends on a constant tussle between levels of desires.

The artist can become hyper-aware, such as Vermeer painting himself painting. 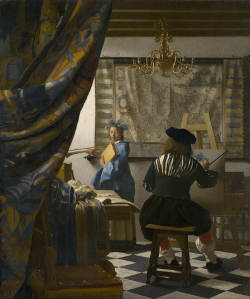 Characters can be hyper-aware, too. In the spirit of the times, Deadpool is the metacritic of his own modern story. I think we’re a bit like that, too. Our life trajectories aren’t always accompanied by smooth echoing storylines. Rather, they’re collaged out of floating fragments of hashtags and selfie-referential photographs. In the future, the digi-dated content of our abandoned social media profiles will baffle alien anthropologists. And if we could see that future moment, our initial reaction might be, “Voyniched the sh*t out of that.”

There are flavors of awareness. One that’s had a curious taste for me is meta. Simply put, content that is self-referential and multiplying to no end. I’m not sure what the taste is like. My hunch is it moved from zesty to acerbic to lysergic. Let's explore that taste and try to figure out why, at certain times, we just don't like it.

The next real literary “rebels” in this country might well emerge as some weird bunch of anti-rebels, born oglers who dare somehow to back away from ironic watching, who have the childish gall actually to endorse and instantiate single-entendre principles. Who treat of plain old untrendy human troubles and emotions in U.S. life with reverence and conviction. Who eschew self-consciousness and hip fatigue. These anti-rebels would be outdated, of course, before they even started.


Maybe Wallace gets at the feeling by pointing to something direct, human. Shake a hand, lock ocular nerves, reminisce for a while. That’s direct. We’ve seen that.

It’s either too contrived and superfluous, or as Wallace predicts, it’ll die before it picks up because it’s too banal.

Or maybe he hits a nerve: We’re tired of stacking entendre’s, one-upping, and potpourri-ing our inner lives with out-of-context historical quotes. We’re digesting too much meta content too often and at some point it’s time to upchuck. For example, take one consequence of meta culture, hyper-irony. Let’s look at how the self-referential layers multiply at an unbearable pace.

Situational irony is when an expectation is met with the opposite outcome. A meteorologist plans a vacation right in the eye of the storm. Modern day Don Juan never gets swiped the right way on Tinder. Your anti-meta culture quote is souped-up into a meta humor meme about your meta humor so that you can laugh at yourself laughing at others laughing about their laughing.

Dramatic irony adds another dimension: audience vs. character perspective. On stage and in film, dramatic irony works effectively by contrasting what the audience knows with what the character believes, so it’s not just the expectation, it’s whose expectation that is important. Romeo thinks Juliet is dead, Schrader isn’t aware that Heisenberg is his brother-in-law, Luke doesn’t know Darth Vader is his father; but the audience knows. The audience waits for the moment when the character replaces his falsehood with the truth, already seen by the audience. An effective irony structure for comedy is that the characters are clueless about their absurdity, even within moments of reflection. Harry and Lloyd are too stupid to know they’re stupid (Dunning-Kruger Effect). Lloyd sells the van for a scooter and, in a moment of reflection, Harry says, “…just when I think you couldn’t possibly be any dumber…you go and do something like this, and…totally redeem yourself!” The audience expects the characters to figure out their stupidity, but they never do.

Perspective in comedy evolves and shifts. In Groundhog Day, Bill Murray’s character and the audience are aware of the eternal recurrence of the day, but no one else is. The next natural, experimental step is hyper-irony: The characters are aware of the irony and will sometimes direct the audience to it. This can be done in Annie Hall fashion where Woody talks into the camera.

The characters can also become aware of the absurdity of the situation. An absurdity occurs, the characters are aware of it, but just to reaffirm, one character responds with any of these shudder-producing words: ‘Really’,‘yikes’, ‘awkward’.

Key & Peele call it out best:

Maybe meta is tiring because it’s ineffectively hyper-ironic. Maybe it’s something else. I asked a friend about this: “Why is it annoying when people try to be meta?” “Because people don’t know sh*t.” Perhaps it’s that each layer is just flimsy, and the bottom layer is just hot air. Behind the commentary about the commentary, there’s no complete idea—just BS. Harry Frankfurt characterizes ‘bullsh*t’ by the non-commitment to truth or falsity. Bullsh*t roams in a vast indefinite space. That makes it wasteful for knowledge. But it makes it a bit of fun. Maybe that’s a function of meta, too. It’s not for anything deep, anything actually meta, but just for fun. That’s why we get tired of and annoyed at meta content. We expect it to be more than what it is. Instead, we can accept it and soup up our bullsh*t.

If you like the rebellion and resignation route, sometimes the Zen line is best: “The mountain is just a mountain.” Or, “When you eat, eat, when you sleep, sleep.” Maybe Deadpool said it better.