Do plants challenge our notion of cognition?

A recent book by plant scientist Stefano Mancuso and science writer
Alessandra Viola, Brilliant Green, tells us that plants are intelligent. To many people, “plants + intelligence” is not the most intuitive combination. They will be surprised to find out that the notions of plant intelligence and plant cognition are no news, and no joke either, for a number of plant scientists (in the image, a New York Times article reporting Francis Darwin’s defense of plant intelligence in 1908 at the British Association for the Advancement of Science), and for a group of philosophers who work on minimal cognition (e.g. Paco Calvo, Fred Keijzer). However, these proposals are typically met with intense skepticism and thus remain largely underground. It’s worth unpacking this resistance to the notion of plant cognition. Let’s see how our notion of cognition fares under the green challenge. So, why can’t plants be intelligent/cognitive?

One tempting way of rejecting the possibility of plant cognition is to say, “they are too different from humans.” An anthropocentric notion of cognition makes it easy to declare plants incapable of what by definition is the sole territory of (a select group of) animals. That is an uninteresting, and also unfair, strategy. If we are to offer a serious resistance to plant cognition, let’s do it relying on a more substantive notion of cognition than “whatever humans characteristically do”.

Another class of common responses to the plant cognition challenge is along the lines of “they are too simple”, “they don’t engage in higher-level cognitive activities such as problem-solving”. The idea of plants as simple organisms is common, but studies in plant science show that plants are very complex systems, in terms of both behavior and physiology (examples abound, see reviews here and here). Plants also have proven to be outstanding at solving adaptation problems faced by living organisms on this planet – at the very least, good enough to become the class of organisms constituting the vast majority of the biomass on Earth. Plants may be looked down upon in the hierarchy of living things, but let’s face it: plants are the true dominant species on this planet! 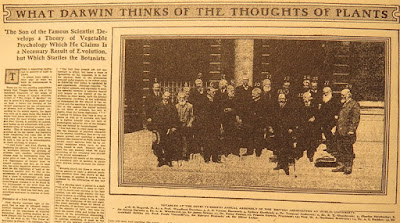 Mancuso & Viola would say we can stop here: their main argument is that complexity and adaptability are all we need to establish plant intelligence. Indeed, if any form of successful complex-problem-solving ability counts as cognition, then it is hard to deny plants are cognitive. But is that an interesting notion of cognition? According to it, any living species has cognition, for it has successfully adapted. Unless we’re content with cognition meaning simply “being alive”, there are more questions to answer: how do plants solve those problems? What are the mechanisms they use? Solving a survival problem by merely reacting to stimuli is quite different from solving it through a set of computations over representational states. Figuring out whether and, if so, how plants compute information is what some philosophers are trying to articulate (see here, here, and here). Now, how do we evaluate plants’ abilities? How do we decide whether plants’ adaptive strategies are complex in the right way? Is there a standard measure of cognition that we can use? In spite of huge progress in figuring out how particular cognitive skills work (e.g. memory, attention, decision-making), Cognitive Science is still lacking consensus about what exactly cognition is. But “we know it when we see it” is not a good working definition, especially when we start disagreeing about what we see. Plants’ reputation as simple reactive organisms may blur our ability to “know cognition” when we “see” it in plants. After all, intellectual abilities have been denied, in spite of blatant evidence to the contrary, to many groups in the past, from women to different racial groups. We should at least try to avoid falling into the same pit again.

A reasonable strategy is to compare plants’ strategies to paradigmatic cases of cognition. This raises new questions, e.g., at which level should the comparison take place? At the functional (computational) level? Algorithmic level? At the physiological implementation level instead? Do we need to find a central controller, á la mammalian brain? But even research in human cognition (e.g. distributed and extended cognition) is abandoning its obsession with the brain. And if cognitive processes (and mental events in general) are multiply realizable in different structures (as Putnam argued long ago), searching for animal-like structures in plants is misguided. To escape the ghost of anthropocentrism, we have to acknowledge that a good and unbiased test for plant cognition can’t set similarity to humans as one of its major criteria. The search for human-like cognition in a clump of stems and roots might be doomed from the start; we should perhaps search, instead, for plant-like cognition. But again, what would it be like?

The consequences of acknowledging cognition in plants will go far beyond revolutionizing Cognitive Science and, possibly, restructuring the traditional hierarchy of living things. Just as cognition in non-human animals has been used in arguments for animal rights, the idea of plant rights would gain traction (Switzerland, by the way, is already there). It could reinforce and expand the arguments in favor of deep ecology; it would introduce new parameters into arguments for environmental justice (e.g., justifications of agricultural biotechnology for the benefit of humans would have to meet an extra challenge); finally, it would definitely complicate food ethics. Whatever happens, we can expect the questions about plant cognition to sprout into an exciting and fruitful debate.