In defense of the chemophobe

A few months ago a meme was circulating in social media. It went something like this:

Dihydrogen Monoxide. It is found in every lake, river and ocean. It is used in nuclear reactors, corrodes metal, burns human skin, and causes thousands of deaths each year.

People responded with outrage and concern, calling for the ban of dihydorgen monoxide. Only later was it revealed that di-hydrogen (two hydrogen atoms), mon-oxide (one oxygen atom) is just plain water. This ‘chemophobe’ meme implies that the ordinary person is gullible, scientifically illiterate, and because of this, overly sensitive and irrationally fearful of pesticides, artificial food additives, genetically modified organisms (GMOs), or other industrial byproducts that make their way into the environment and food chain.

Here is a second example of the ‘chemophobe’ meme. This time, the message is more explicit:

“Nearly every chemical constituent will, in certain concentrations, kill children and adults....Don’t be alarmed by words you don’t understand.…Read. Understand. Reduce the stupid. Science. It reduces the stupid.” 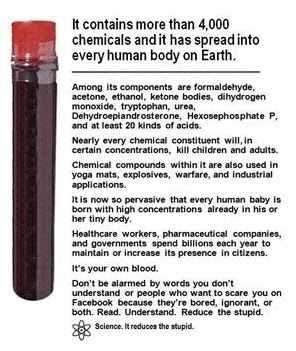 Attacks on the public’s aversion to industrial chemicals are not limited to social media. Frustrated scientists, industry representatives and risk assessors contend that if only the public understood the mathematics involved in calculating risk probabilities, they would realize there is no reason to fear ‘life-bettering’ bio-technology and chemistry.

This criticism rests on two fundamental mistakes. The first is to assume that rational aversion to death and other harms is a linear function of the probability of death and other harms (see Daniel Kahneman, et al)  In other words, it is a mistake to assume that because a particular risk probability is small, the value of avoiding the risk is also small. However, people often have very good reasons for viewing risks of fatality or serious injury in a non-linear way. Here are just two:

First, the value of accepting or avoiding a given risk depends upon the benefits associated with the risk. A person may rationally decide to expose themselves to a greater risk while at the same time choosing to avoid a lower-probability risk because of the benefits associated with each. For instance, I might choose to drive because I need to get to work even though I know that the leading cause of death or serious injury for those in my age group is automobile accidents. The same person who drives to work every day may rationally decide to avoid the lower-probability risk of BPA by using BPA-free water bottles. For example, this would be rational if there were no benefits to be gained by exposing oneself to the low-probability risk. Consider the following example given by philosopher of science, Kristin Shrader-Frechette: You are asked to play a game of Russian roulette where the chances of death are one in ten thousand. It is rational to refuse to play even though the chances of death are small because there is nothing to be gained by playing. Analogously, a person may rationally decide to avoid products with endocrine disruptors like BPA, for example, either because these products are not necessary or because there are safer alternatives available.

Second, it is sometimes rational to view risks non-linearly if the risks are not morally equivalent. It is morally important how one comes to be exposed to a given risk. In other words, there is an important moral difference between risks that are imposed on us and risks that are voluntarily chosen. It seems perfectly rational to be much more averse to risks that are imposed on us without our consent than other risks that are voluntarily accepted. Citizens who are concerned about pesticide residue on produce, artificial food additives and un-labed GMO ingredients, or emission levels from the local factory are concerned about risks that have, in many cases, been imposed on them. It seems rational to have a non-linear risk aversion favoring chosen to un-chosen risks (see, e.g., Kristin Shrader-Frechette's Risk Analysis and Scientific Method).

A second mistake made by the ‘chemophobe’ meme is that it is not clear that the probability of harm from industrial pollution and other toxins is low. While lifetime exposure for each individual toxin might be within acceptable limits, the combined effect of hundreds of environmental toxins may put us at significant risk. For instance, the Center for Disease Control estimates that about 144,000 cancer deaths per year can be traced to non-tobacco related environmental pollution. This accounts for about 30% of all deaths from cancer.

Finally, there are vulnerable people in our population who are more susceptible to pollution than others. Women, children, workers, the elderly, the disabled and the poor are either more vulnerable to pollution or experience greater exposure. One need look no further than our current headlines. In Flint, Michigan the concerns of citizens about the water quality in the city were dismissed, belittled and mocked for months before journalists revealed corruption among the city’s officials. The citizens in Flint were told they were being paranoid.

So am I an “irrational, bored, stupid, alarmist” who is overly fearful about toxins in our water, air and food? On behalf of the 8,000 children in Flint Michigan who have suffered irreversible damage to their brains and nervous systems…on behalf of those in cities like Flint, I am a ‘chemophobe.’