The high costs of cheap goods and cheap talk

Reports of price gouging have come fast and furious in the wake of the recent devastating hurricanes affecting areas to our South and Southeast. These reports have led to threats from politicians and social media outrage. You shouldn’t get behind this.

Start with this question: what should we say about the following people?


1. In response to the series of hurricanes brutalizing Gulf Coast areas, Smith rents a U-haul and fills it with bottled water, generators, pre-paid cell phones and other supplies. She drives through the ravaged areas and gives these all away to victims, free of charge.

2. Jones also rents a U-haul and fills it with these supplies. She also drives them to these areas, but sells these supplies to victims either at cost or at their “normal,” pre-disaster prices.

3. Johnson does the same, except she decides to sell these goods at supernormal prices considered “exorbitant or excessive.” People still readily buy them because they need them so badly.

I suggest the following ranking: Smith is extremely generous and praiseworthy. Jones is less so, though still quite generous considering the sacrifice of her time and effort; Johnson isn’t morally praiseworthy at all.

Some go further and condemn Johnson as a gouger, without any sense of conscience. And, as Texas Governor Greg Abbott said in one news conference, “price gouging is not only reprehensible, it’s illegal.”

For example, Florida law makes price gouging punishable by fine of $1000 for every violation up to $25,000 each day. Fines are bigger in Texas. There Johnson could be fined as much as $20,000 for a gouging offense. If Johnson’s Texas customer happened to be aged 65 or older, the top fine goes up to $250,000. 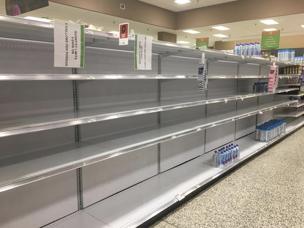 There are two points to make about this condemnation of Johnson. First, behold the high costs of goods artificially kept cheap.

Keeping the sticker price of something low doesn’t mean you will keep costs low. Waiting a long time for it and, worse, going without it are also costly and probably a lot less efficient way to economize on its use than allowing the price to surge. A friend during the evacuation in Florida was headed up the panhandle with ¾ of a tank of gas, but stopped to fill up “just in case.” He might have decided differently if gas prices were $6.80/gallon instead of $2.80. 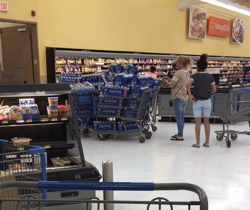 If he had, this would have meant available gas for someone with a tank at or near empty.

Also, limiting consumption with lines or empty shelves doesn’t do enough by itself to instigate the sort of intense and focused supply efforts affected areas need. Say what you want about Johnson, but like Smith and Jones she is bringing stuff people need where they need it. Others motivated by the profit opportunity might do so as well, which is what we should want.

This leads to the second point. It’s instructive to add another point of comparison relative to Johnson:


4. When Robinson learns about the devastation brought to Gulf Coast areas, she logs into Facebook to write a heartfelt post: “Thoughts and prayers for all the victims of Harvey and Irma! 😭 ” 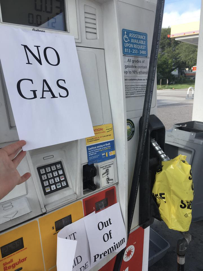 Comedian Anthony Jeselnik has argued that the sentiment here roughly translates into "don't forget about me today." Even if that’s not quite correct, this kind of talk is cheap and worth much less than what Johnson does. So, it’s perverse to condemn Johnson but like Robinson (or “like” his status update). Again, maybe Johnson isn’t praiseworthy, like Smith and to a lesser extent Jones are, but at least she does that without which people would be significantly worse off.

And let’s make this more personal. I didn’t rent a U-haul and deliver supplies to hurricane-affected areas. I didn’t do it free of charge or at any price. Did any of you? How much money would it have taken to inspire you to deliver needed supplies to hurricane victims? Would you have done it in exchange for the actual costs, like Jones? No, right? Would you do it in exchange for $5000 or $10,000 over your actual costs? No? Johnson (or “gougers” like him) did, despite legal threats.

In that case, even worse than Robinson is:


5. Williams condemns “price gougers” and uses her political influence to back a law punishing them.