While evolutionary psychology has led to a proliferation of (often outlandish and essentializing) claims about innate human traits and tendencies, the view that human morality is innate has a long and reputable history. Indeed, broadly evolutionary accounts of morality go back to Darwin and his contemporaries. Views that posit innate cognitive mechanisms specific to the domain of morality (viz., moral nativism) are of more recent vintage. The most prominent contemporary defenders of moral nativism adopt a perspective called the “linguistic analogy” (LA), which uses concepts from the Chomskian program of generative linguistics to frame issues in the study of moral cognition.[1] Here, I present one of LA’s key data points, and propose an alternative, non-nativist explanation of it in terms of learning. 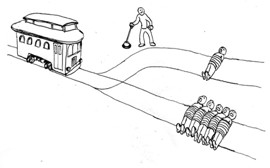 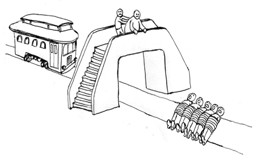 The results from cross-cultural studies of the trolley problems and similar dilemmas suggest that subjects’ judgments are sensitive to principled distinctions like the doctrine of double effect, where harms caused as a means to a good outcome are judged morally worse than equivalent harms that are mere side effects of an action aimed at bringing about a good outcome.[2]

To explain the acquisition of these implicit rules, LA invokes an argument from the poverty of moral stimulus. For example, Mikhail argues that to judge in accordance with the doctrine of double effect involves tracking complex properties like ends, means, side effects, and prima facie wrongs such as battery. It’s implausible that subjects’ sensitivity to these abstract properties is gained through instruction or learning. Rather, a more plausible explanation is that humans are endowed with an innate moral faculty that enables the acquisition of a moral grammar (which includes the set of these rules).[3]

I believe that other research from language acquisition and the cognitive sciences more broadly points to the availability of a different explanation of how these implicit rules could be acquired, via learning mechanisms not specific to the moral domain. Evidence suggests that children employ powerful probabilistic learning mechanisms early in their development.[4] With these mechanisms, children are able form generalizations efficiently, on the basis of what might otherwise appear to be sparse data.

I propose that a similar process of inference could account for the acquisition of implicit moral rules. There may be sufficient information contained in the stimuli to which individuals typically are exposed in the course of their early development – including the reasoning and response patterns of adults and peers in their environment – to account for their ability to make such moral distinctions. Consider the act/omission distinction. Cushman et al. found that subjects judge in accordance with what they call the ‘action principle’, according to which harm caused by action is judged morally worse than equivalent harm caused by omission.[6] Children observe this distinction in action. A child may be chided more harshly for upsetting a peer by taking a cookie away from her than for upsetting a peer by failing to share his own cookies, for example. With the probabilistic learning under consideration, it may take surprisingly few such observations for children to generalize to a more abstract form of this distinction. Observing the distinction at play in a few different types of scenarios may be sufficient for a learner to generalize, and go beyond tracking the distinction just in the particular cases observed to infer a general model that could have given rise to data they have encountered.


Of course, further investigation is needed to comparatively assess these two proposals. I’ll end by noting that the debate over moral nativism has both theoretical and practical implications. If the non-nativist account is right, this points to a view of our capacity for moral judgment as more malleable and amenable to intervention and improvement than the nativist account suggests. On the other hand, some (though not all) take the nativist account, if correct, to invite a skeptical view about morality.