What honey bees taught me about philosophy of science

The most natural way of understanding the role of mathematics in science is as a representational one. When we say that ‘water boils at 100 Celsius’ we do not tend to think that the number 100, in itself, explains the boiling. Rather, number 100 represents the physical processes that explain it. This can clearly be seen if we change the units to Fahrenheit. In that case, it would be 212, and not 100, the number that would pick out the relevant physical processes. What is more, in principle we can express these numbers in first order logic, thus removing any trace of mathematics.  As Joseph Melia puts it:

“[M]athematics is the necessary scaffolding upon which the bridge [of science] must be built. But once the bridge has been built, the scaffolding can be removed”

In recent years, some philosophers have claimed that mathematics is capable of doing more than this; that mathematics can in fact explain the occurrence of a physical phenomenon. In fact, many of these philosophers argue that this is a reason to be a mathematical realist (a believer in the existence of mathematical objects). One of the most prominent authors defending this view is Mark Colyvan. For Colyvan, mathematics plays a genuinely explanatory role when the mathematical component in a scientific explanation is indispensable to the success of the explanation. If a case is found where mathematics plays such a role, we would have a genuinely mathematical explanation of a physical phenomenon (MEPP). One of the alleged cases of MEPPs proposed by Colyvan is the honeycomb case.

Honeycombs divide the space into hexagonal shapes instead of other possible shapes like triangles, squares, etc. The explanation of this comes in two parts:

1) It is evolutionarily advantageous for bees to minimize the amount of wax they use in building their honeycombs.

2) Following the honeycomb theorem (known as the ‘honeycomb conjecture’ before it was proved by Thomas Hales in 2001), the best way of dividing a surface into regions of equal area while minimizing the total perimeter is by a hexagonal grid; and this is why bees build their combs in hexagonal shapes. 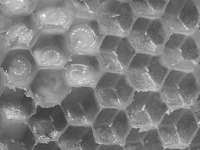 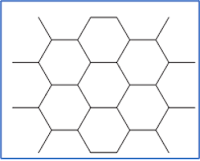 This evolutionary explanation depends on a mathematical fact (the honeycomb theorem). It supposedly shows why, no matter which shapes the bees tried throughout their evolutionary history, once they tried hexagons this trait passed on, because hexagons are evolutionarily advantageous for any bee that builds combs.

For Colyvan, the upshot is that, unlike the temperature case, in this one mathematics itself would be playing an explanatory role, in the sense that, if you remove the mathematics the explanation would fall apart. And if you were a scientific realist who justifies your realism by the principle of inference to the best explanation, then you would have to accept mathematical realism (unless you feel comfortable engaging in double-think).

Now, despite the widespread attention devoted to this case, it has recently been discovered that the honeycomb theorem does not explain the hexagonal shape. An explanation that does not appeal to the honeycomb theorem has been recently advanced by engineer Bhushan Karihaloo, and reported by Philip Ball in a recent volume of Nature (2013).

According to Karihaloo, the hexagonal shape is due to some properties of wax, as well as the particular procedure bees follow for building their combs. In an experiment, Karihalloo interrupted the bees in the process of making their combs and found that, whereas the older cells were hexagonal, the newer cells were circular. He concluded that bees simply make circular cells packed together like a layer of bubbles. Because the bees heat the wax with their bodies as they build the circular cells, once they finish and move to another cell the wax starts to harden into hexagons (that hot wax retracts into hexagons as it cools and hardens had already been proven in 2004). Thus, as Ball reports, the hexagonal array of honeycombs “owes more to simple physical forces than to the skill of bees”. This explanation sketches the causal history of the explanandum, showing that the hexagonal shape of the combs was due to specific causal processes undergone by the wax. The explanation suggests that the hexagonal honeycombs occur, not because they are evolutionarily advantageous, but because of the relevant forces produced by the interaction between wax and heat.

This case has taught me many lessons about the philosophy of science. I want to share two. Just like other branches of philosophy, philosophy of science also deals with perennial questions (existence, knowledge, duty, etc.), but our subject matter is constantly moving. In 2012, Colyvan had a good case (albeit not conclusive) to the effect that there are MEPPs in science. Some philosophers not convinced by other alleged cases were in fact on board on this one. But a new scientific study shows up and the example pretty much becomes useless. This of course doesn’t only affect philosophy of science (think, for example, of the ethics of technology), but I believe that it does affect us more prominently.

Another lesson I learned from the honeycomb case is that this fluidity in the philosophy of science sometimes requires you to act quickly. By 2014, I was already aware of both Colyvan’s views and the Karihaloo experiment, but at that time I was very busy with grad school and did not have time to publish my criticisms to Colyvan. But a few years later, when I did have the time, I found a 2017 paper making the exact point I was going to make…